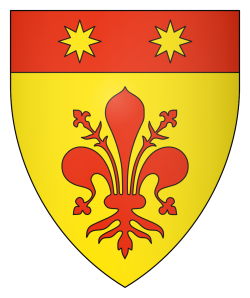 Or, a Florentine fleur-de-lys and on chief gules two mullets of eight points Or.

Lady Sofya came up with an initial design for her armory last year, but the submission paperwork was never finalized and she wanted to make a few tweaks.

Her persona resides in northern Italy and she’d previously selected the Florentine fleur-de-lys as her primary charge, as well as choosing red and gold as her personal colors. In the course of the design process she identified the eight-pointed star as a recurring theme in Italian heraldry and included that as well. 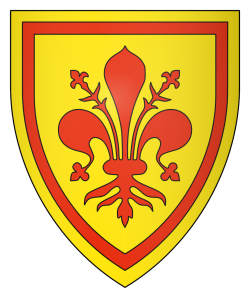 Or, a Florentine fleur-de-lys within an orle gules.

A second design which was developed during the consultation is being submitted as a personal badge.

It’s very reminiscent of the arms of Florence, which are argent, a fleur-de-lys gules.

The fleur-de-lys charge used here comes from Gunnvôr silfrahárr’s “SVG Images for Heralds” collection, and is the distinctively-Florentine version with visible stamens between the petals. While at one time the SCA blazoned this charge a “fleur-de-lys Florencee,” that practice seems to have become less common, and these may wind up being registered as generic fleurs-de-lys, with the particular styling an artistic variation visible only in the emblazon.

[Update, Nov 2017: This armory was accepted for registration.]