The canton’s registration of a new device and populace badge have been forwarded by Blue Tyger Herald from the East Kingdom to the Society’s College of Heralds, and I thought this would be a good moment to look back at the branch’s previous heraldic registrations.

(My thanks to Baroness Shauna of Carrick Point, Laurel Archivist, for retrieving these records from the depths of the Society’s storehouse.)

The canton took shape in the heart of the Crown Province of Østgarðr in the mid-to-late 1980s. (See the writeup on Cunan by Alexandre Lerot d’Avigné for a brief history.)

Riffing on the mis-reading of Østgarðr as “cheese farm” and the century-old nickname for the brightly-lit midtown portion of Broadway, the initial proposal was to name the canton “Grate Whyt Whey”, but the first word was dropped during the registration process as being too ahistorical. 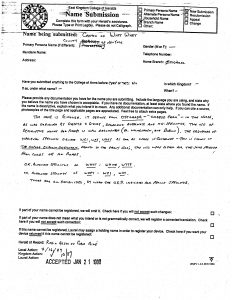 The name registration submitted in June 1989 for the Canton of Whyt Whey provides the following supporting documentation:

The name is English. It derives from Ostgardr — “Cheese Farm” — in the Norse, as was explained by Daffyd z Goury, regarding alternate and mis-spellings. The use of descriptive nouns for places is well documented (ex. Whitehaven, and Dublin). The vagaries of medieval spelling equate Wei, Way, Whey as far as usage is concerned— this is shown in The Oxford English Dictionary, dating to the early 1300s. The uses were either for the juice pressed from curds or for roads.

These are all possibilities, by what the O.E.D. indicates for period spellings.

When the East Kingdom forwarded the submission to Laurel in the Letter of Intent of October 1989, they described it thusly:

The name is a descriptive place name. Whyt is a spelling of white, cited by the OED from 1403. Whey is a spelling of way. the OED shows wei, whay, wey, way as period spellings of both of the nouns whey and way. It thus seems reasonable to use whey as a form of way. Reaney, DoBS, p.380 dervies the surname Whiteway from a place of that name. That place is  not significant enough too merit a conflict, and the name is probably acceptable under NR 1.d. the Descriptive Name Allowance.

The College of Arms was less amused by the punning, but accepted the registration in January 1990 with the comment:

After much discussion, we decided that this came under the “Rule of Toyota”. (Yes, this is a Canton in Manhattan…)

(The “Rule of Toyota” is shorthand for “we don’t think it’s a good idea, but if you want it we’ll let you have it” and references an advertising campaign of the 1970s that declared “You Asked for It, You Got It!”) 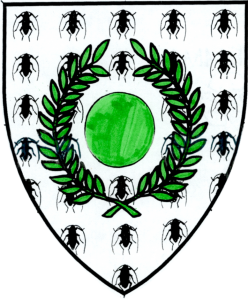 Argent semy of cockroaches sable, a pomme within a laurel wreath vert.

The initial design for the canton’s arms was submitted in 1991. As described in Cunan, “Some of the founding members were adamant about it having cockroaches, that most indomitable of local fauna, on it. Others were grossed out by the idea. The cockroach won.”

The green roundel in the center, known heraldically as a “pomme”, is a canting reference to the city’s nickname “the Big Apple.”

The College of Heralds found the semy of cockroaches unsettling and refused to register it:

This is being returned under RfS I.2., Offense. This general principle states that “no submission will be registered that is detrimental to the educational purposes or good name of the Society, or the enjoyment of its participants because of offense that may be caused, intentionally or unintentionally, by its use.” Given the universally negative reaction of the commentors to this semy charge, it is believed that a significant percentage of the populace of the SCA will find this device so offensive as to reduce their enjoyment of and participation in SCA activities.

A badge featuring a cockroach had been registered in 1981, although with some discomfort — it may be that the semy’s evocation of a field of scurrying roaches put this design over the top 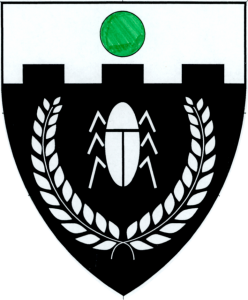 Sable, a cockroach tergiant within a laurel wreath and on a chief embattled argent, a pomme.

Eight years later, the canton tried again, this time using a single cockroach instead of the semy.

In the intervening years, the College of Arms had accepted a registration of arms from Skallagormr Berserkr featuring a cockroach, noting that that a similar design appeared in Schrot’s Wappenbuch of 1581, blazoned a “beetle.”

Perhaps relying on that precedent, the canton submitted a new design, blazoning the central charge a “German beetle”.

The College of Heralds accepted the registration in August 1999, changing the blazon with the following note:

The primary charge was blazoned as a beetle; however, single cockroaches are now allowable charges. As their previous submission used cockroaches, we changed the blazon to match what we believe is their intent.

This device has remained in place since then, although it is rarely used; the only place I have seen it displayed is as part of a pennant with the arms of the Crown Province and each of the cantons which is flown in the Østgarðr encampment at Pennsic.

If the new arms are successfully registered this summer, this design will be maintained as the “ancient and honorable arms” of the canton in perpetuity.

1 thought on “Heraldic Registrations of the Canton of Whyt Whey”