But over the course of its nearly fifty-year history, it turns out there have been nine other affiliated branches, eight of them founded in a two-year period from 1979 through 1981.

These were generally short-lived, in part because of two changes in branch organization: firstly, the practice of new shires or cantons being initially granted only “incipient” status had not yet been made routine; nowadays a branch must demonstrate continued activity for a longer period of time before becoming recognized as a full branch; and secondly, most of these branches were associated with college campuses (which typically have transient populations) and the current practice of allowing a college branch to go dormant and be revived later was not as well established.

Most of the information below comes from “A Geographic History of the East Kingdom” by Lord Richard the Poor, supplemented by the records of the Laurel Archivist of the College of Arms.

All three of the above names were registered simultaneously and in bulk rather than via the usual process. The Laurel Archivist’s files contain only a letter from Baldwin Laurel, written in 1986, stating that “in July and October of 1979, Master Wilhelm registered the names of a considerable number of SCA branches,” and few other details are available.

(The many names released in December 1989 were part of a wave of 37 defunct branches in the East Kingdom that had their names and armory released that month following a request by the Board to clear the backlog that had developed; see the the December LoAR for the list, and the accompanying cover letter for more details.)

One additional canton was formed subsequently to the 1979–81 wave: 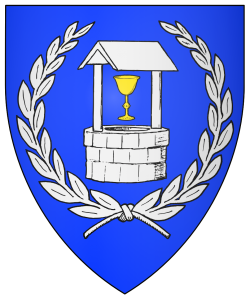 The arms of Saint Pyr’s Well were Azure, a roofed well argent, between its posts a goblet Or, all within a laurel wreath argent.

Saint Pyr is a tragi-comic figure from Welsh history, a lax abbot who became so drunk one evening that he fell down a well and drowned.