I needed some time off after the big push to get the Book of Traceable Heraldic Art into shape for Pennsic, but have made a bit of continuing progress on it this autumn.

We’re now up over 950 pages of traceable illustrations, and should blow past a thousand pages before the end of the year. (It’s amusing to note that at the start of the year I thought a thousand pages was likely to be the end point of the project — at the current rate, we could plausibly reach two thousand somewhere in the next couple of years.)

I’m also working on a new printable “catalog” layout that allows people to easily scan through design elements at a consultation table — it packs most of the tinctures, divisions, and charges into a compact format that’s a bit over fifty pages rather than a thousand. 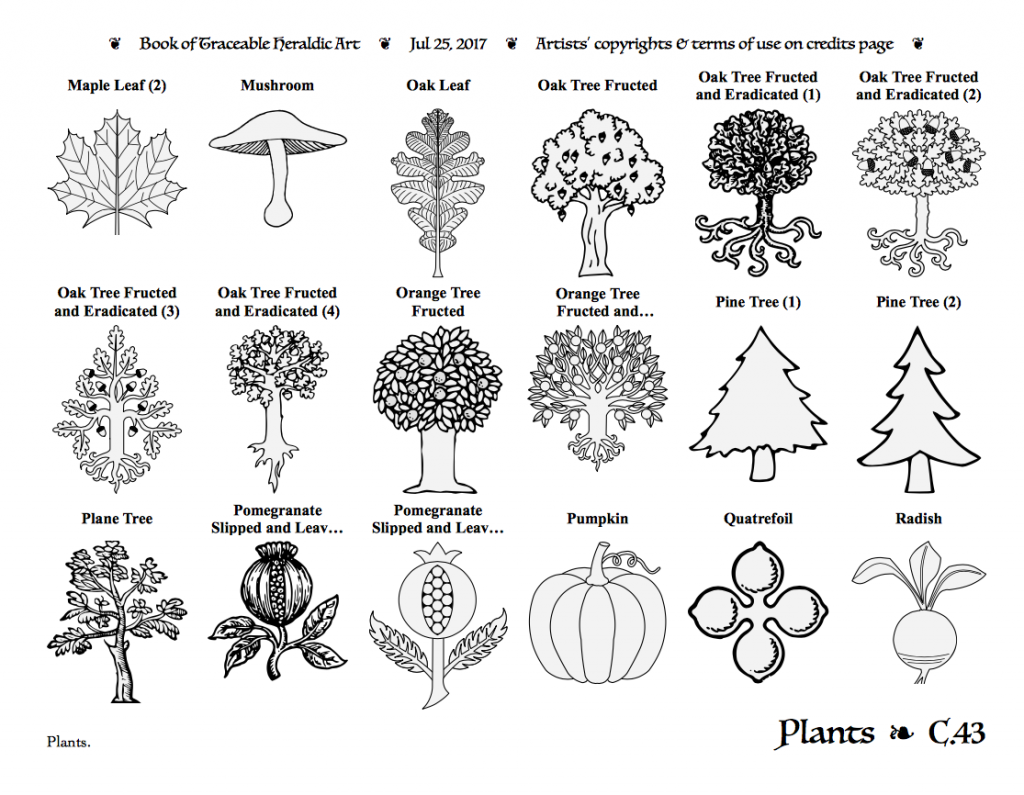 The catalog layout still needs some cleaning up around the edges — I’m using a Perl script to rearrange the SVGs and metadata from the original document into a series of web pages which are then converted to PDFs via JavaScript and Chrome, which seems kind of jury-rigged but so far seems to mostly work.

The answer to the first question is found in the Administrative Handbook of the College of Arms, section III.B.7., “Armory Used by the Submitter Outside the Society,” which reads:

No armory will be registered to a submitter if it is identical to an insignia used by the submitter for purposes of identification outside of a Society context. This includes armory, trademarks, and other items registered with mundane authorities that serve to identify an individual or group. This restriction is intended to help preserve a distinction between a submitter’s identity within the Society and the submitter’s identity outside of the Society. Any change that causes a blazonable difference between mundane and Society armory is sufficient to allow registration by Laurel.

So, if you have arms in the mundane world, you must make at least one minor change to them in order to register them in the SCA.

On the other hand, we don’t normally conflict check against all registered armory everywhere in the world, as noted in section III.B.3., “Significant Personal and Corporate Armory from Outside the Society,” which specifies that:

So assuming you’re not the Queen of England or something equally prominent, if you kept quiet about it, you could plausibly sneak in your personal arms without anyone catching it. And the College seems loath to retract registrations after the fact, so even if people found out about it afterwards you might get away with it. But I’m not sure if anyone has ever tested this, and I’m not encouraging you to try it. 🙂

As we approach the 50th anniversary of Østgarđr, and indeed of the East Kingdom — because in the beginning, Østgarđr was the East — we’ve been looking back over our history, and in keeping with that project I thought I would catalog the armorial devices of the viceroys and vicereines of Østgarđr since the earliest days. END_OF_DOCUMENT_TOKEN_TO_BE_REPLACED

I recently consulted with our provincial seneschal to prepare a submission for a member of his household. 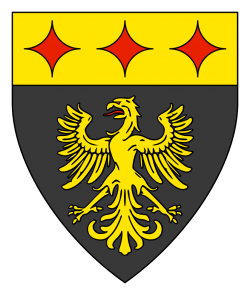 Sable, an eagle Or, orbed, langued, and armed argent, and on a chief Or three lozenges ployé gules.

Josef knew he wanted his arms to include an eagle as a nod to the arms of his knight, and wanted a chief with a set of three charges that would reference his hometown football team, the Steelers, and their stadium, formerly known as Three Rivers. The lozenge ployé, sometimes blazoned an “Arabic napkin,” comes directly from the team’s logo.

SENA Appendix A states that German names may take an locative byname marked by “von <place>.”

Ulm is a city in the Baden-Württemberg area of Germany. Its name is attested to 854, where it is called “Hulma” in a document signed by King Louis the German. In Georg Braun and Franz Hogenberg’s Civitates Orbis Terrarum (Cologne, 1572), the woodcut map of Ulm is labeled both in Latin, as “Ulma,” and in German, as “Ulm” (written “VLM”).