As we approach the 50th anniversary of Østgarđr, and indeed of the East Kingdom — because in the beginning, Østgarđr was the East — we’ve been looking back over our history, and in keeping with that project I thought I would catalog the armorial devices of the viceroys and vicereines of Østgarđr since the earliest days. 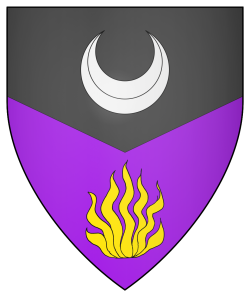 He bears Per chevron inverted sable and purpure, a crescent argent and a flame Or. 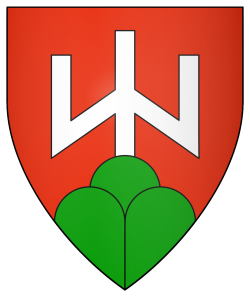 She bears Gules, a sans-serif letter “M” inverted surmounted by a pallet couped argent issuant from a trimount vert.

This design is evocative of traditional Eastern European coats of arms. Polish armory is known for most often using red fields bearing gold or silver charges. Polish armory is also notable for many charges based on geometric shapes, which are derived from tamgas, a system of brands and badges used to mark property by medieval Mongols and related Eurasian nomadic cultures. Hungarian armory frequently feature gold or silver charges emergent from a green mountain on a red field. The central charge here is reminiscent of the trident featured in the arms of Ukraine. The society does not have a lot of Eastern-European armory, so this submission provoked some interesting commentary at the kingdom and society level, and in the LoAR. 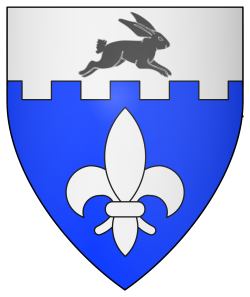 He bears Azure, a fleur-de-lys and on a chief embattled argent a hare courant contourny sable.

Guise is a town in northern France.

Registered May 1996 under the name Guy Cheveux de Guise. 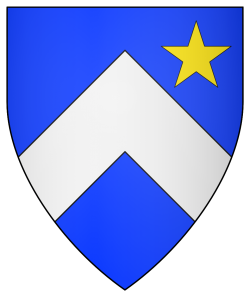 Johanne i Visby was the third vicereine of Østgarđr.

She bears Azure, a chevron argent and in sinister chief a mullet Or. 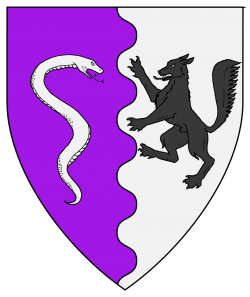 He bears Per pale wavy purpure and argent, a serpent, glissant palewise and sinister facing, argent and a wolf rampant sable. 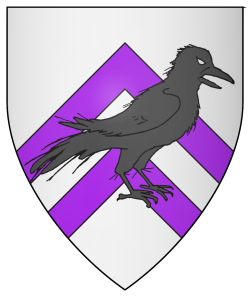 Eularia Trewe was the second vicereine of Østgarđr. 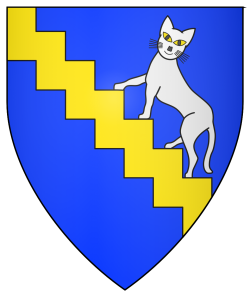 Ian of Clan Mitchell was the third viceroy of Østgarđr.

He bears Azure, climbing a bendlet indented Or, a cat passant bendwise argent orbed Or.

(Today we would blazon this beast as gardant.) 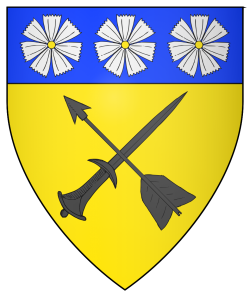 She bears Or, in saltire an arrow inverted and a dagger sable, on a chief azure three gillyflowers argent, seeded Or.

The gillyflower is a medieval ancestor of the modern carnation. 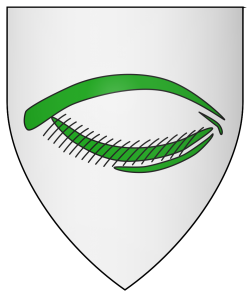 Cassandra of Bethel was the second viceroy of Østgarđr.

Registered June 1972 under the name Cassandra of Beth’lem. (Image as submitted.) 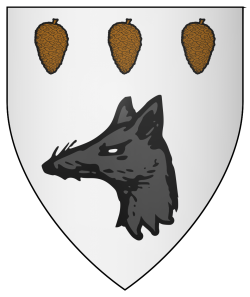 Vardak Mirceavitch Basarabov of Iloi was the first viceroy of Østgarđr, serving in this position for less than one year.

Updated Nov 12: Thanks to some feedback on Facebook, I’ve corrected a mis-colored field both above and in the combined “poster” version that shows all of the arms in chronological order as a single image.

Updated Jan 27: I noticed that I had incorrectly emblazoned Lada’s arms with a mountain rather than a trimount; this has been corrected.