Over three hundred and fifty images have been added to the Book of Traceable Heraldic Art since the November update, drawn from a variety of sources.

The set I’m most excited about is the first batch of 94 images from Torric inn Björn’s Heraldic Templates, which was published in 1992 and, as far as I know, is the earliest collection of art distributed specifically to facilitate tracing in construction of society armory. My sincere thanks to Lord Torric for granting permission for these images to be re-published here.

This booklet offers far more potential than its 56-page size would suggest, because it contains elements which can be recombined in multiple ways; for example, it contains a few illustrations of deer in various postures as well as examples of various types of antlers that can be mixed and matched together to create stags, elk, and reindeer in those positions. Þórý Veðardóttir has helpfully worked through a number of these combinations, ringing the changes on postures of dragons, wyverns, cockatrices and basilisks. We’ve got dozens more  of these images still to process, and I look forward to getting them all online in the months ahead.

Another source of new images in this last round has been John Guillim’s 1611 A Display of Heraldry. While its engraved style with extensive shading contrasts with the pen-and-ink outline style used in most society submissions, the images are useful patterns for tracing that (with a bit bit of adaptation) can be used digitally as well, and I enjoy seeing material that dates from so close to our period of study. I’m particularly fond of his Dr. Seuess-ish eel and turkey.

I’m also continuing to work through the images from the 2007 Pennsic Traceable Art book, which yields over a dozen heraldic dog postures newly added to the collection this month, and from the Viking Answer Lady’s SVG Images For Heralds collection, which helped fill out some more of the many varieties of heraldic crosses.

The further I get into this, the more I realize how much remains to be done, so I’m looking forward to a productive new year as the collection continues to grow.

Seònaid is new to the society, but has thrown herself into it full throttle, and only a few weeks after her first event had designed a device and come up with an authentic name, making my job as herald relatively easy — with just a little fiddling around the edges we were able to get her ideas into registrable shape and submitted.

The design Seònaid came up with is nice and simple, as were the best period designs.

The fact that there were no conflicts was a pleasant reminder of how much available design space remains open in the society’s armorial.

Seonaid is a Scottish Gaelic female given name attested to the fifteenth century. It is discussed in Academy of Saint Gabriel Report 2120 (Judith Phillips, 2001) which cites Scottish Verse from the Book of the Dean of Lismore (William J., ed., 1937).

Some useful discussion of the interpretation of the source material for Seonaid may be found in the Oct. 2009 LoAR acceptance for Seonaid Upton.

inghean is the Gaelic marker for “daughter of”. It is listed in SENA Appendix A as a standard element of female names when combined with the genetive form of their father’s given name.

inghean is also in shown as a standard name element in “Quick and Easy Gaelic Names” (Sharon L. Krossa, 2007)

mhic Aoidh is the genetive form of Mac Aoidh, a Gaelic male name formed from “Mac” (son of) and “Aoidh” (a common male given name). It is discussed in Academy of Saint Gabriel Report 3038 (Aryanhwy merch Catmael, 2005) which cites Woulfe s.n. mac Aoidh.

The combined form inghean mhic Aoidh is mentioned in Academy of Saint Gabriel Report 1793 as a plausible byname for the daughter of a clan chieftain.

Pronunciation for Gaelic names often requires a bit of puzzling, and this one is no different.

On first glance, some folks might read Seonaid as “Shin-aid,” thanks to the fame of Sinead O’Connor, but the modern pronunciation seems to be “Shoh-nah”, like the name Shona.

The period pronunciation seems to have been similar, but with a soft “t” added to the end. One source describes it as “Shoh-na[tch]”, with the [tch] representing something like a ‘d’ sound but with your tongue against your front teeth instead of the roof of your mouth.

Those of us who aren’t great at making unusual sounds, myself included, can go for something half-way between Shoh-nah and Shaw-nat and they’ll be in the right ballpark.

In the sixteenth century, inghean mhic Aoidh might have been pronounced “Neek Eye”.

In the fifteenth, “inghean mhic” hadn’t yet gotten squashed together, so it would’ve been something more like “Nee-an week Eye” or even “Een-yan veek Eye”

(The h in “mh” is acting as a lenition marker, which softens the sound of the letter that comes before it; I think of “mhic” as trying to say “meek” except that when you say the “m” you’re not allowed to put your lips all the way together the way you normally would for an “m” sound, which leaves you with something closer to a “w” or “v” sound.)

Submitted in December 2017 and accepted on the June 2017 LoAR published that August, with a correction that we’d used the wrong accent on Seónaid.

Sixteen months after being made the Herald of the Canton of Whyt Whey, I have been appointed the Herald of the Crown Province of Østgarđr, whose title is Seahorse Pursuivant. My report from the meeting of the Provincial Officers Council follows.

To the populace of the Crown Province of Østgarðr, on behalf of their Viceroy and Vicereine, does Mathghamhain Ua Ruadháin send his greetings.

Following this evening’s Commons meeting, the Provincial Officers Council gathered to review the candidates for those offices whose terms expire this month.

Herein are recorded the result of that session as I recall them.

Baronè Francesco Gaetano Grèco d’Edessa has stepped down as Seneschal. Please join me in thanking him for his service.

Hlæfdige Alienor Salton, called Piglet, has been selected as the new Provincial Seneschal by a vote of the Officers Council.

Alienor has also been appointed to be the province’s Webminister. The former occupant of that office, Lady Arnora Ketilsdottir, stepped down earlier this year to care for her newborn — our thanks and congratulations to her and her family.

Alienor is stepping down from her positions in the Canton of Whyt Whey, ceding those offices to her deputies; Lady Vika Grigina z Prahy will serve as the Seneschal of Whyt Whey, and Lady Anneke Valmarsdotter will become the Whyt Whey webminister.

Lord Mongu Chinua has stepped down as Herald. He has the province’s appreciation for his efforts in this office in recent years.

Your humble correspondent, Mathghamhain Ua Ruadháin, has been appointed to be the new provincial Herald. I have asked Chinua to stay on and assist me as deputy herald, for I shall have need of his knowledge.

I am stepping down from my position as Herald of Whyt Whey, and passing that office to my deputy, Lord Erich Guter Muth, who served in that position before me.

Lady Marion of York has stepped down as provincial Fencing Marshal. She has ably led the rapier corps, and we look forward to seeing her on the field again in the coming year.

Alexander MacLachlan has been appointed to serve as the Fencing Marshal. In recent months he has been actively working to energize the fencing program and we eagerly anticipate his continued success. Alienor has also asked him to assist her as deputy Seneschal, where his experience will be much appreciated.

Magistra Rufina Cambrensis has been re-appointed to her position as provincial Chronicler. Her reliable publication of our monthly newsletter, the E-Horse, is a valuable service to all members of the populace.

By my hand at Straus Park on the feast day of St. Florentius, I remain yours in service,

A recent question on a society heraldry Facebook group about the dimensions of the escutcheon on the submission forms reminded me that I never posted the comparison outline I put together last year showing how it diverges from the geometric construction typically used to create this “heater shield” shape.

The most common technique for drawing a heraldic escutcheon, shown in red below, is to lay out a rectangle which is three times as wide as it is tall, then add a pair of quarter circles below it, enclosing the area where they overlap.

The escutcheon on the society’s submission forms, shown in black below, is slightly different; the curve starts lower and then pinches in more steeply. 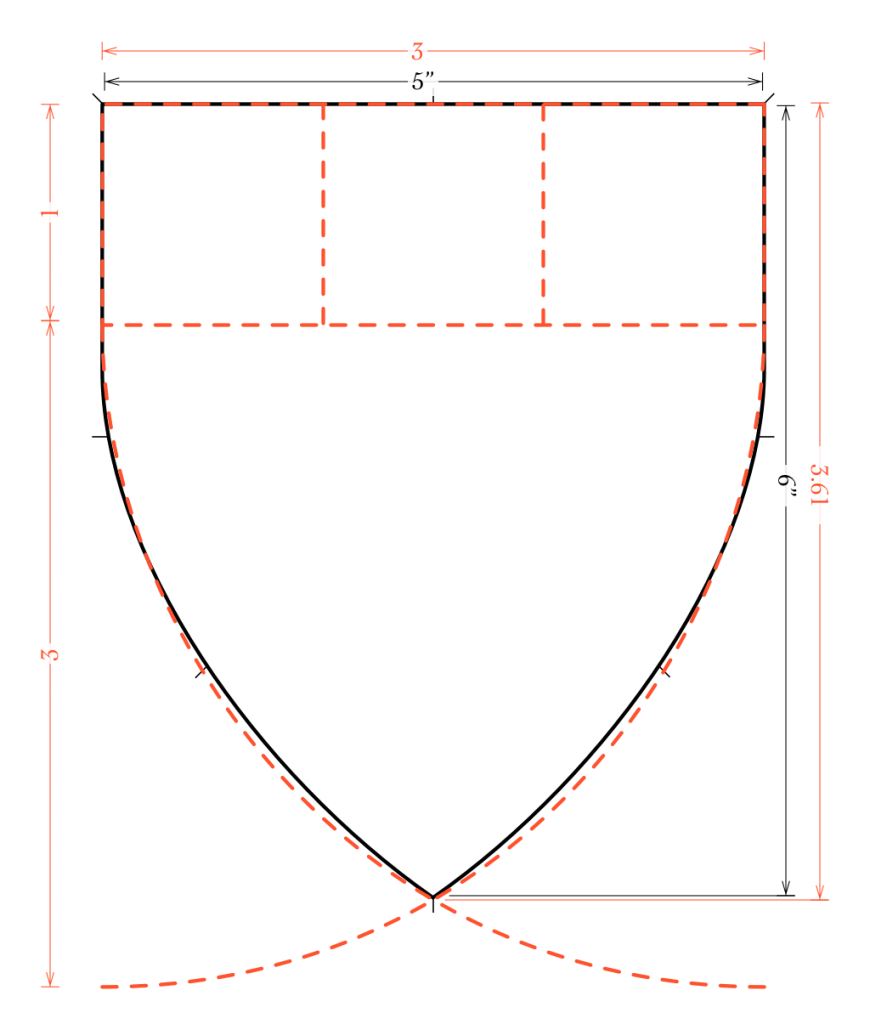 I don’t know if there’s a concrete reason these curves are different; it may have been an accident, or an aesthetic judgement by the illustrator, or perhaps there’s some other explanation that’s been lost in the mists of time.

The difference is relatively small, but it’s enough to bite you if you use a computer to create field divisions or peripheral ordinaries or the like. Submissions which do not use the precise escutcheon shape from the form are likely to be rejected.

I haven’t found a geometric construction that precisely matches the submission form, but I’ve very carefully traced the outline from the form so that I can create heraldic clip art that matches it.

The diagram above is available as a PDF; you’re welcome to print it out and hold it up behind a copy of the submission form to confirm that the outlines match up precisely.