Catelin wanted a name and device that reflected her family’s Scottish heritage, and had already picked a basic direction, so it didn’t take much additional effort to help her select something that was both unique and registrable. 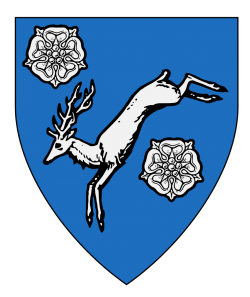 Azure, a stag courant to dexter base between two roses argent.

Catelin had been interested in a “bucking” stag, but as that isn’t a recognized heraldic posture, we went looking for alternatives which would produce a similar visual effect.

While “courant to dexter base” is an unusual arrangement, it has been registered twice, most recently in January 2016.

The white rose was a badge of the House of York.

The illustrations for both charges are taken from Fox-Davies’ 1909 book A Complete Guide to Heraldry.

Catelin is a female given name found in the British Isles.

Straquhin is a late-period byname from the Scottish Lowlands.

SENA Appendix C indicates that after 1100, English and Scottish name elements may be combined.