On the eighth day of September, in year fifty three of our society, their Excellencies Østgarðr, Suuder Il Kha’an and Lada Il-Khatun, returning home from their recent victories in the summer’s war, did progress to their canton of Northpass for the Feast of John Barleycorn, and therein did hold court.

Their Excellencies began by inviting all newcomers, who had attended no more than three events, to present themselves, and they expressed their pleasure to see the great number of gentles who stepped forward. Each of the newcomers was given a seahorse candle as a token of the province’s welcome and was invited to return again soon, and the populace cheered for their continuing participation. END_OF_DOCUMENT_TOKEN_TO_BE_REPLACED

A notable characteristic of armorial depiction is that any illustration of a given design is considered to be heraldically equivalent. For example, any illustration of “Gules, three lions passant guardant in pale Or” is said to represent the English Sovereign, no matter in what style the lions are drawn, as long as they accurately reflect that blazon.

Konstantia Kaloethina has assembled a nice demonstration of this principle in her “Heraldic Mythbusting” blog post containing nine different illustrations of “a seraph proper” by six different artists.

Two seraphs proper; the first by myself using an illustration by Vinycomb, the second by Konstantia Kaloethina. (Shared with permission.)

In addition to these illustrations, the post provides some period examples of “artistic license,” explains some boundaries on when it’s taken too far, and discusses the Society’s heraldic registration policies — it’s definitely worth a read.

The regalia committee of the Crown Province of Østgarðr has solicited design proposals for a pair of field coronets for the Viceregents.

I’ve never designed anything of this sort before, but it seemed intriguing and I wanted to try my hand at it. The results are attached in PDF format. 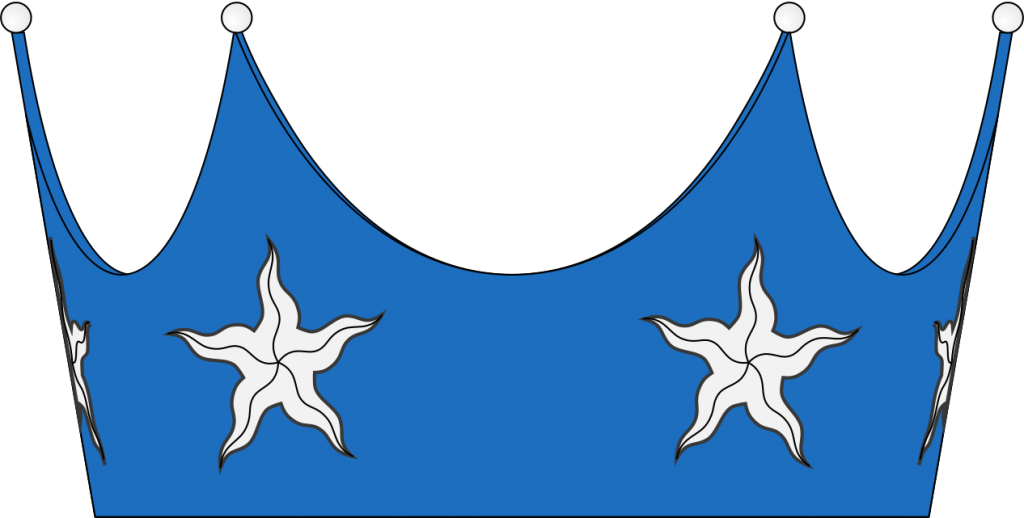 I expect that the province has received other submissions with more artistic merit, and don’t expect this design to be selected, but this was a good learning exercise, and I figured it’d be good for the other entries to have a little competition.