Sydoc nicTalmach is a Scots feminine name of the sixteenth century.

Sydoc is a feminine Scots given name dated to 1540 found in “A List of Feminine Personal Names in Scottish Records” by Talan Gwynek.

This name was originally found in Black’s Surnames of Scotland, s.n. MacKail.

nic is a marker (also spelled nyk/nick/nikc/nik) that appears in 16th century Scots records as a contraction of Gaelic ‘inghean mhic’, meaning ‘daughter of the son of’. Unlike in later Irish Gaelic orthography, no space appears after the marker in Scots.

This is shown in the 1595 records for “Katherene NicClaartie” and “Ewphrick Nikccoll” which appear in “Names from Papers Relating to the Murder of the Laird of Calder” by Margaret Makafee. 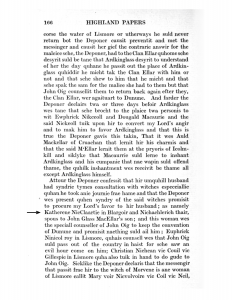 Talmach is a Gaelic male given name (sometimes spelled Tolmach). Saint Talmach is a minor saint who was a disciple of Saint Brendan in sixth century Ireland. The name is found in The Book of Hymns of the Ancient Church of Ireland by James Henthorn Todd, 1855. 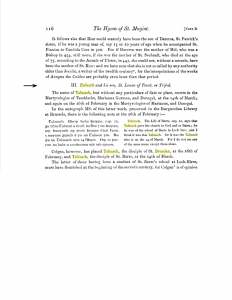