Earlier this week, I became curious about the simplest armory designs that remained available for registration in the Society — was it still possible to find two- and four-part field-only armory that didn’t use furs, field treatments, or complex lines?

I spent some time looking at all of the current field-only armory: 219 devices and badges registered over the last forty-eight years. A visual sense of the diversity of these registrations is provided by Vémundr Syvursson’s Field-Only Emblazons project from last year, in which he drew out all 202 of these that had been registered at that time.

It quickly became clear that in order to find any design spaces that remained open, I would need to take advantage of the fact that I had parsed all of the existing records from the Society’s Ordinary and Armorial into a relational database, which allowed me to run queries that would filter and group registrations to produce a summary of which combinations of lines and tinctures had been used in the past.

The results of that analysis suggested some corners of the design space that might be promising, but I still needed to individually conflict-check the combinations I came up with. In response to a question on the Facebook Heraldry Chat group, Marie de Blois pointed out an approach to checking field-only armory I had overlooked, which allowed me to work through a bunch of options in a timely fashion.

In short, to filter the O&A for possible conflicts with field-only two-part or four-part armory such as “Per fess argent and sable,” you can run a complex search with these parameters:

Any results that appear with a score of 4 or higher are a potential conflict.

I wasn’t sure what I would find at the end of this process — were all of the super-simple options taken, or closed off due to conflicts with more complicated designs — or would I find that there were dozens of options sitting vacant?

The truth turned out to be somewhere between these two extremes: about a dozen opportunities to register field-only designs using the most common two- and four-part divisions with plain lines and solid tinctures.

I wasn’t entirely sure I should publicize the results of my search — should I leave these hidden in obscurity for people to find one at a time over the coming decades? Was publishing a list of them like giving poachers a map to the nesting sites of the last surviving members of a species teetering on the bring of extinction?

In the end, I decided that there was no real harm done by revealing this information, and thus I give you:

There was room in the per-pale family for one additional registration, or two if they gave each other permission to conflict; the colors involved work well for my wife and I, and so I have filled out the submission forms, and I think that closes out the last per-pale options.

I didn’t find any such opportunities available for the per-fess or per-chevron divisions.

In addition to those narrowly-constrained options, it turned out there was a wider latitude among the less-common per-chevron-inverted fields, where there is room to register a handful more devices. Some possible combinations include:

In addition to the tincture combinations listed above, there are several other ways you could mix-and match the options for per-chevron-inverted fields; for example, “sable and argent” is still available, as is “Or and vert” — however, “argent and vert” has a conflict. While the number of possible combinations is large, since each item that is registered creates a conflict for a dozen others, there’s only room for about five actual submissions.

In addition to the items listed above, there may be a few more options available thanks to blanket permission-to-conflict waivers on file, or by asking individual submitters for such permission.

And of course, it’s possible that I’ve overlooked something in my search, and there are other unregistered opportunities out there, waiting for some enterprising person to come along and find them: if you decide to go looking, I wish you good hunting! 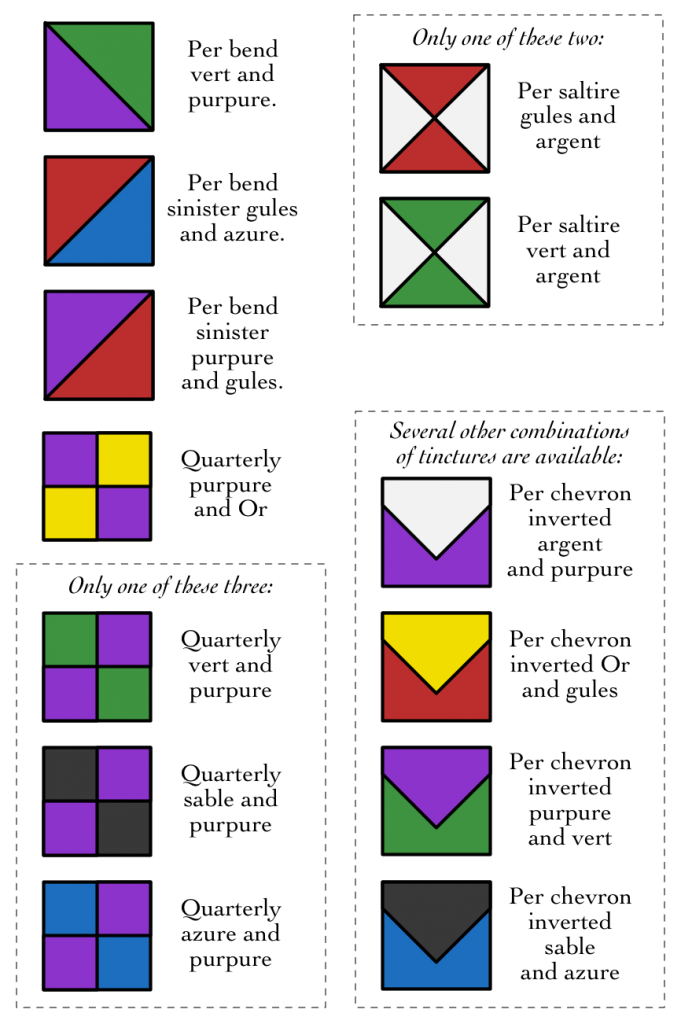 Available as a PDF file or as a high-resolution PNG.