In comparison to the simplicity of his chosen armory, researching his chosen name was significantly more difficult, because documentary sources for Germanic peoples in the period immediately following the collapse of the Roman Empire are somewhat limited, and it is not a culture with which I have much familiarity — an interesting challenge, and a good learning opportunity. 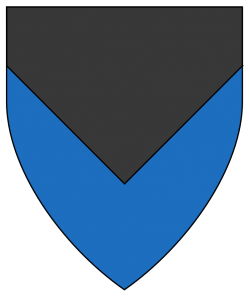 Per chevron inverted sable and azure.

“Hrotger the Tervingi” is an Eastern Germanic name that might be borne by a Goth somewhere around the fourth century.

Hrotger is a Germanic male given name.

Hrotger appears as the name of a Saxon bishop during A.D. 909-916 in “The bishoprics of Saxony in the first century after Christianization” by Christopher Carroll, published in the August 1999 issue of Early Medieval Europe.

The name Hrotger is given as a witness to a real-estate transaction during the reign of abbot Adalgar (AD 822-875) on pages 50 and 57 of “Traditiones Corbeienses“, an 1843 re-publication by Paul Wigand of a document copied in 1479 from an eleventh-century manuscript which was itself copied from parchment rolls recorded at the time of the original transactions.

“Hroðgar” is given as the name of a Danish king who ruled shortly after 500 AD, according to the Old English poem “Widsith,” which was first composed in the seventh century, although our oldest copy of it was written down in the tenth century.

“Tervingi” is a Eastern Germanic demonym used to refer to some Gothic tribes.

The “Theruingi” people are mentioned in “Res Gestae” by Ammianus Marcellinus, written circa 385 AD, as well as their nation, “Theruingorum natio,” and their leader, “Athanarichus Theruingorum iudex.”

If “Tervingi” is ruled unregistrable, or too far removed in time from documentable sources for “Hrotger”, client would accept “Hrotger the Goth.”