He decided it was time to register a device, and asked for “an angry, fighting, pissed off peacock, his tail plumes out” on a red and black field. 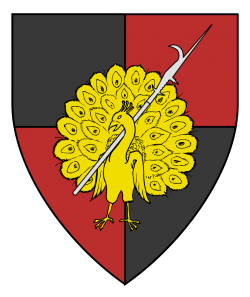 Quarterly sable and gules, a peacock in his pride Or  maintaining over his shoulder a billhook bendwise sinister argent.

I found a fierce-looking depiction of a peacock in the Pictorial Dictionary of Heraldry and combined it with a wicked-looking polearm traced from a photograph of a medieval exemplar.

Engel is a German word meaning “angel” used as a male given name. This use is documented to 1497 in “German Names from Nürnberg, 1497.”

der is a German article sometimes used to mark descriptive bynames. Examples including “der Fuhs” (“the fox”), “der Rise” (“the giant”), and “der Guot” (“the good”) are documented to the early thirteenth century in “Some Early Middle High German Bynames.”

Pfau is a German word meaning “peacock” used as a descriptive byname. This use is documented to 1560 in FamilySearch batch C73926-2 which shows that Barbara Pfau was christened on 5 December 1560 in Wuerttemberg, Germany.

The documentation I found for these name elements is separated by about three hundred years, which is close enough for Society registration, but I suspect that people with more expertise in German onomastics will be able to locate additional examples that show them all to have been used within the same century, preferably around Engel’s preferred first decades of the sixteenth century.