The College of Arms has a rule commonly phrased as “we do not register fieldless badges that appear to be independent forms of armorial display.”

Below, I will attempt to explain this sometimes-confusing rule, catalogue which shapes are considered to be “forms of armorial display,” and note features which cause this rule to not apply.

For a review of the history of rulings on this subject, see my subsequent post: Precedent Review: Can Plain Lozenges and Roundels Be Used as Fieldless Badges?

(Please note that while I have strived to find all of the relevant rulings in the College of Arms’ fifty-year history, and to supply citations to the governing standards and precedents that established them, this issue is complicated, and I can not guarantee that this guide is without error.)

At its core, the idea here is that you are not allowed to register a badge of “(Fieldless) On an escutcheon vert a cross argent” because this is indistinguishable from a regular device “Vert, a cross argent” displayed on a shield, and it should be submitted that way both to avoid confusion and so that it can be subjected to the standard conflict-checking rules for fielded armory.

This same principle applies to other charges than a basic shield, because historically arms could be displayed on other shapes depending on context. For example, armigerous British women would typically display their arms on a lozenge, so registration of the badge “(Fieldless) On a lozenge Or a mullet gules” is indistinguishable from the regular device “Or, a mullet gules” displayed  on a lozenge.

So, which shapes are subject to this rule?

In general they fall into a few categories that reflect the most prominent places where arms were displayed in period:

This is the most standard form of armorial display, and an obvious source of potential confusion.

In addition to the standard escutcheon, other shapes that were used as shields in period, such as a kite shield or tilting shield, are also subject to this rule. 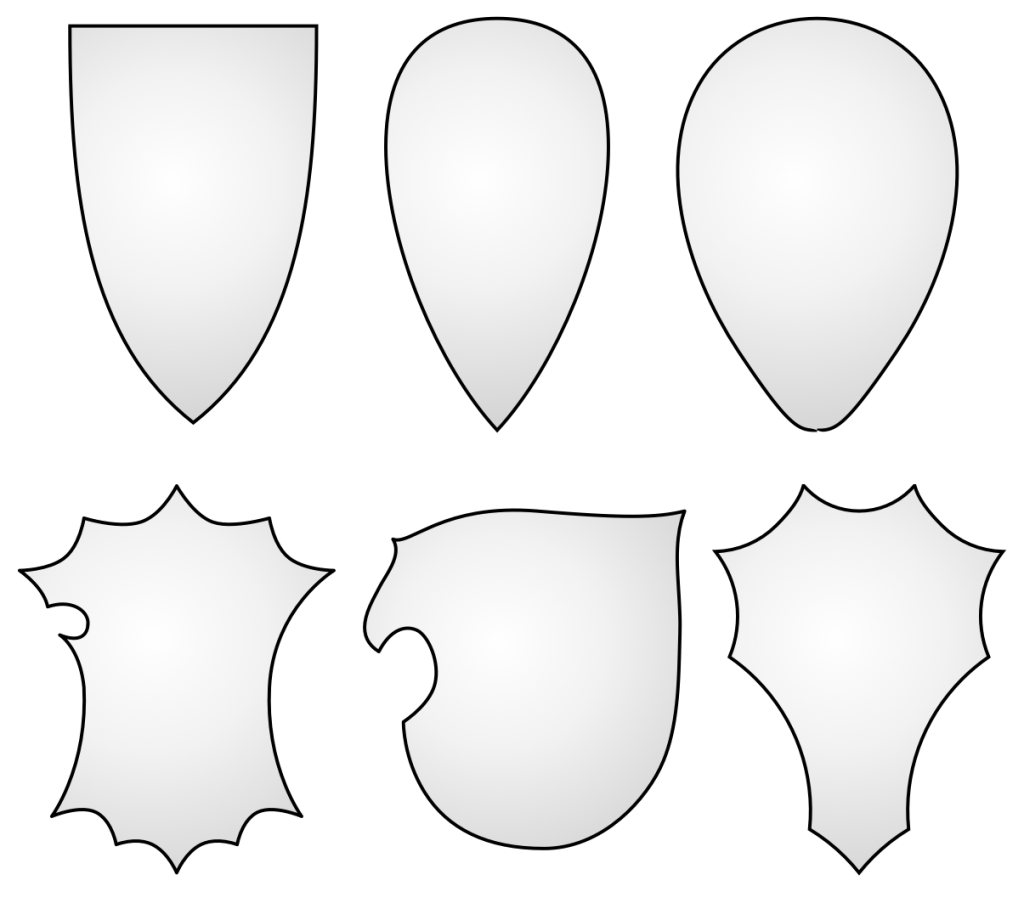 Roundels are a common form of display for fielded badges in the Society, such as order medallions, and were the standard shape used on badge submission forms in the past.

Charges which consist of a roundel with minor detailing may also be covered by this rule.

… a round buckler (complete with shield bolts and central boss)… is a medium for heraldic display…
— [Barony of Raven’s Cove, Return, Jan 2016 LoAR]

Lozenges were a standard form of armorial display used by women in period. Lozenges remain an alternative shape for Society device submission forms.

A lozenge ployé is a lozenge with concave sides.

Lozenges ployés do not escape this rule and are considered to be a shield shape for the purposes of this precedent.
— [Adeliz Fergusson, Returned, Mar 2016 LoAR]

The delf, or square, is the shape used on the Society’s current badge submission forms.

The billet, or rectangle, is the most common shape in period for armorial banners. When fesswise, they’re the shape used for modern national flags.

A cartouche is an ellipse, or alternately a shape with two semicircles joined by straight lines.

A cartouche is a recognized medium of heraldic display, having been used a various times for clerical estates and for women’s armory.
— [Ragna Kolgrimsdottir, Returned, May 1996 LoAR]

A stylized heart shape is considered to be a form of heraldic display, largely on the basis of a limited number of heart-shaped shields found in the fourteenth century.

There are two separate arguments for considering triangles to be forms of heraldic display:

… the triangle inverted must be considered such a medium, comparable to the escutcheon, lozenge, or roundel. It may be considered either an early-style shield (Neubecker’s Heraldry: Sources, Symbols and Meanings, p.76), or a lance-pennon.
— [Barony of Dragonsspine, Returned, Mar 1993 LoAR]

These triangles may be equilateral or skinnier than that: 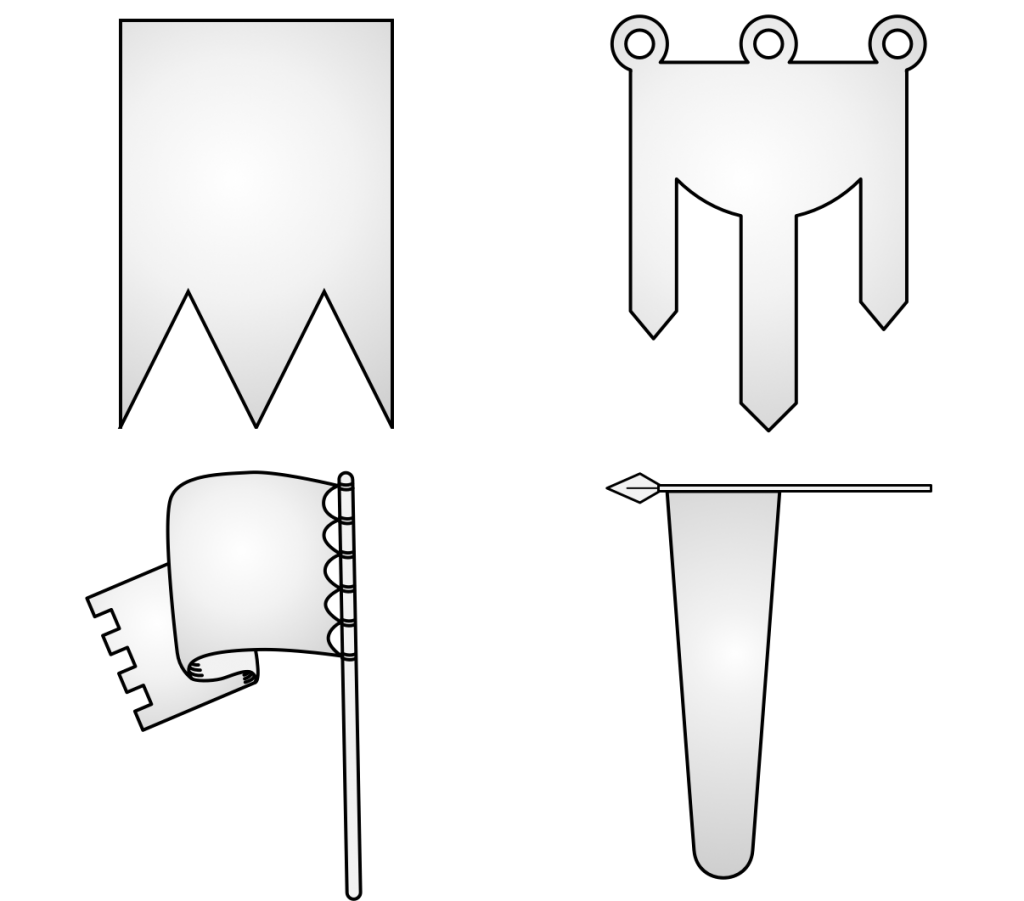 … a charged sail appears to be an independent display of armory…
— [Eiríkr Mjǫksiglandi Sigurðarson, Returned, Jun 2003]

Shapes Not Used For Armorial Display

There are a few shapes which have been mentioned as possible candidates for “forms for armorial display” during commentary but ruled to not be considered such.

A chief is not generally considered an independent display of armory, and so it needn’t be considered as such.
— [Duncan Bruce of Logan, Accepted, Mar 2012 LoAR]

An open scroll is not a medium for heraldic display under our rules, so this device is acceptable.
— [Nicholas de Estleche, Accepted, Dec 2010 LoAR]

There has recently been some discussion as to whether the hexagon should be considered a form of armorial display based on its use in Japanese armory, but the final ruling did not seem to protect it in this way.

The following exceptions describe cases in which this rule does not apply.

This rule is limited to items which could plausibly be registered or protected as independent armory.

The Society does not register armory that consists of an plain uncharged field, and there are only two cases of third-party armory which are protected: the ermine arms of the Duchy of Brittany, and the solid vert flag of Libya (1977-2011). As a result, this rule does not prohibit the registration of fieldless badges consisting solely of an plain uncharged shape (unless it is ermine, or in some cases vert) because those designs could not be considered an independent display of armory.

Therefore, a “shield shape” which is also a standard heraldic charge will be acceptable as as a fieldless badge in a plain tincture, as long as the tincture is not one of the plain tinctures that is protected armory in the SCA.
— [Solveig Throndardottir, Accepted, Apr 2002 LoAR]

However, as noted above, the plain tinctures that are protected are considered to conflict with fieldless badges consisting of an any of these shapes in ermine or vert.

This badge [(Fieldless) A lozenge vert] is returned for conflict with the flag of Libya, Vert.
— [Groza Novgorodskaia, Return, Dec 2018 LoAR]

(However, as outlined in the history of rulings, there was a period from 1997 through 2002 where these uncharged plain shapes were not registrable as fieldless badges.)

This restriction only applies if there is a single primary charge with no secondaries.

Charged lozenges are acceptable so long as they do not look like arms of pretense or arms within arms. Only charged single cantons, inescutcheons and cartouches are specifically restricted. One could have three inescutcheons, each charged with a mullet, for example, but not just one.
— [Barony of Storvik, Accepted, Jul 1981]

Inverting or rotating a shape may modify its appearance enough that it no longer appears to be an an independent display of armory.

A heart can be a such display of armory. However, since this a heart inverted, we are willing to register it, since the inversion will make it look like a charge…
— [Giulietta da Venezia, Accepted, Jan 1998 LoAR]

Applying a complex line to the edge of a shape undercuts the impression that it is an independent display of armory:

[Added January 2021:] Although primary and secondary charges in a fieldless badge must not be voided (because there is no field to show through the void), charges which are naturally pierced — such as the annulet (which might be thought of as a voided roundel) or the mascle (a voided lozenge) — may be used in fieldless badges without creating the appearance of an independent display of armory.