During the five years in which I’ve been thinking about medieval armory,  I’ve registered four different designs with the College of Arms of the Society for Creative Anachronism, and as I’ve started thinking about further registrations it seemed prudent to pause and take stock of my current inventory.

My arms are blazoned “per fess argent and vert, a bear passant gules.”

This design deliberately echoes the Welsh flag, which uses a similar design but with a dragon instead of a bear. Bears were hunted to extinction in Ireland before 500 BCE but continued to appear in the mythology of Irish and British culture.

The red bear makes a good symbol for me — I am heavyset, bearded, and somewhat red of face — and reflects my Society name, Mathghamhain Ua Ruadháin, which can be loosely translated as “bear cub of the little red one” or “bear of the red clan.”

Many people display their arms upon an escutcheon, but I’m not much of a fighter, and so I more often display my arms on a banner or gonfalon: 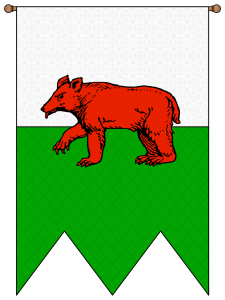 The arms are repeated along the length of my standard:

My fieldless badge is blazoned “a bear passant gules.”

I use this badge to mark things I own or have created; for example, it appears on some of my heraldic reference materials. 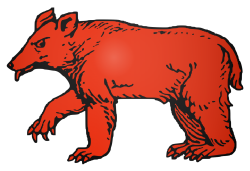 I have a simple field-only badge blazoned “per pale vert and Or.”

I think of this as my “ancient” banner, a relic of a pre-heraldic era. 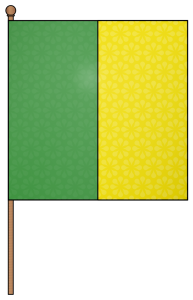 I have a badge with a design that in German is called “bärenschnitt” (bear cut), but in the Society is awkwardly blazoned as “per bend sinister argent and gules, issuant from the line of division a bear’s head and a bear’s head inverted contourny counterchanged.”

I haven’t used this badge much but I think is destined to be a seal: 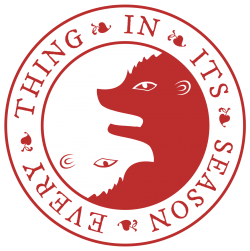