Because the tasks performed by the Morsulus Herald mostly take place behind the scenes, even experienced members of the College can be a little vague about what’s involved, so I put together a high-level conceptual diagram that outlines how some of the main elements are related. 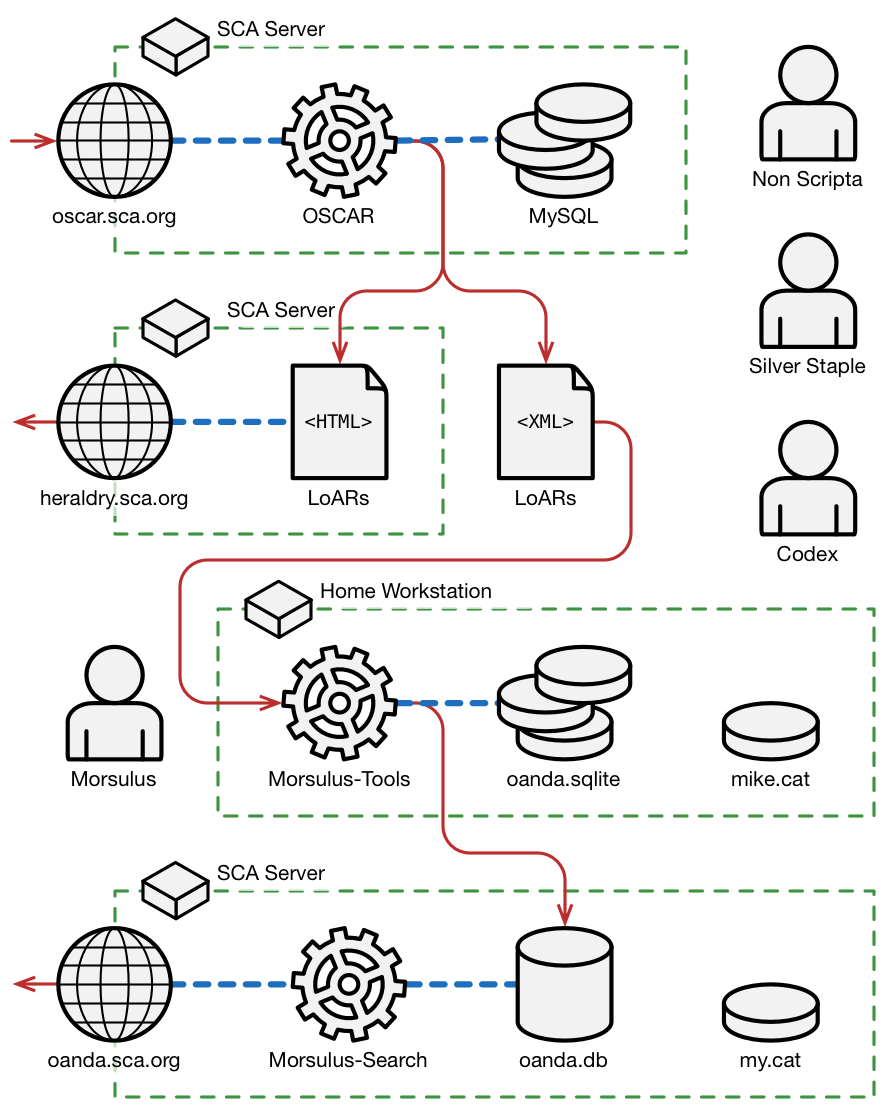 Most experienced book heralds are familiar with the submission and commentary process that takes place on OSCAR. The Online System for Commentary and Response is available at oscar.sca.org where a collection of PHP code backed by a MySQL database allows for letters to be entered and tracked as authorized users provide commentary and the Sovereigns make decisions. This system was created by and is maintained by Istvan Non Scripta.

After the decisions for a month’s worth of letters have been made, the post-meeting clerk, known as the Silver Staple Herald, facilitates a process of generating Letters of Acceptances and Returns in various formats, which go through a multi-month process of editing and proofing before being posted on heraldry.sca.org in HTML and other open formats. The general maintenance of that web site is managed by the Codex Herald; currently the Codex and Silver Staple positions are both held by Reis ap Tuder.

Each month’s LoAR is transmitted to the Morsulus Herald, who is responsible for managing the College’s database of registrations. For the last twenty years, the position of Morsulus has been held by Herveus Gnome.

The LoAR arrives in several formats, including HTML and PDF versions which are posted immediately and made directly visible to the public, and an XML version which undergoes further processing to update the database of name and armory registrations.

Morsulus maintains the master database on a personal workstation as a SQLite database and related delimited-text files, and uses the Morsulus-Tools collection of open-source Perl code to manage it. Each month’s XML LoAR is converted to a flat-file format that contains a series of update actions which are then applied to the database, followed by a series of quality-control checks to verify that the data remains consistent. [Update, Apr 2021: A subsequent post lays out the database update process in greater detail.]

Morsulus also fixes small problems that have been reported via email, such as typographical errors or mis-indexed armory, using interactive command-line tools to make manual updates to the database.

When a month’s updates have been fully processed, the database is packaged as a large delimited-text file which is transferred to the oanda.sca.org web site. Once it is there, the Morsulus-Search collection of open-source Perl code provides a web interface that allows it to be browsed and searched interactively.

This high-level overview is necessarily oversimplified, but hopefully it provides some useful scaffolding within which a more detailed understanding of the process can be constructed.