Greetings, and thank you for your interest in this humble blog. 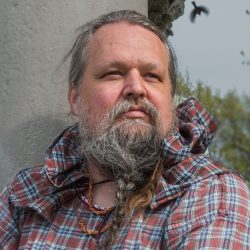 In August 2016 I was appointed the herald of the Canton of Whyt Whey, in the East Kingdom‘s Crown Province of Østgarđr, located in New York City.

In December 2017, I stepped down from that position to serve a two-year term as the herald of the Crown Province of Østgarđr, known as the Seahorse Pursuivant.

I currently serve as the East Kingdom’s Elmet Herald, responsible for heraldic education.

My primary heraldic interests are in armorial design, where I serve as a consulting herald and am working on the Book of Traceable Heraldic Art, but I also dabble in local society history and cartography, as well as serving as a provincial youth combat marshal and using my limited carpentry skills to build some simple objects for use at society events. 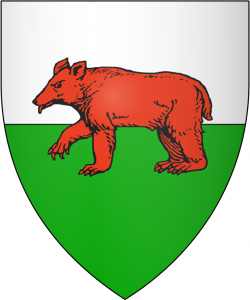 My arms are per fess argent and vert, a bear passant gules.

My society name is of Irish origin, and is pronounced something like “Ma-huwon Wah Roo-ahn,” with a guttural sound between the two syllables of the first name. However, Gaelic accents have shifted over the last thousand years and varied from region to region, so several other pronunciations would also be acceptable; most people in my local area say the name as if they were reading the modern Irish form of the name according to English pronunciation rules, “Mathúin,” and my teen son likes “Ma-who-in Oh Ruin.”

Feel free to contact me with any questions or feedback about this site or related matters.