I’ve continued adding charges to the Book of Traceable Heraldic Art, drawing from both the Pennsic Traceable Art collection and from period sources, and it’s now up to over 800 pages of illustrations.

Of these, I’m particularly fond of this image of a tent from Guillim’s Display of Heraldry (1611).

There’s also a new External Resources page that lists charges which are found in the PTA or PicDic but do not have corresponding images in this collection, and a Contributing page with some preliminary notes about how to send in your own art for inclusion.

Alax is is my son, and wanted a name that reflected his mother’s Scottish ancestry, and a device suggestive of his primary interest in the society: youth combat. 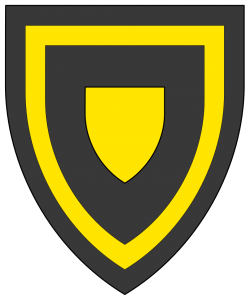 Sable, an escutcheon within an orle Or.

Black and yellow are the colors of the martial offices, and after trying dozens of different designs he settled on these nested shield shapes.

Alaxandair is a Gaelic form of Alexander, first recorded as the name of a Scottish king born at the end of the 11th century (Alaxandair mac Mael Choluim), as well as two 13th century successors (Alaxandair mac Uilliam and Alaxandair mac Alaxandair), and then appearing more widely in records in the 13th and 14th centuries.

Pronounced “AH-lek-SAHN-dare.” Later variants include Alasdar, Alasdair, Alustar, and Alasdrann. The name comes from the Greek Ἀλέξανδρος (Aléxandros), which loosely translates to “defender of the people.”

Mórda is Gaelic for “great,” “exalted,” or “lofty.” Our original plan was to submit this as the related “Mórail,” which is modern Gaelic for “great,” “magnificent,” or “majestic,” but we were unable to document this to period, and a consulting herald at Pennsic helped us find Mórda instead.

mac is the standard Gaelic patronymic marker, meaning “son of.”

Matha is a Gaelic form of Matthew, his father’s given name. It appears in the Irish annals in 1258, and then repeatedly in the 1300s. (Mari) Pronounced “MA-tha” or perhaps “MA-ha.”

Name and device submitted at Pennsic Heralds’ Point in August 2016 and accepted on the April 2017 LoAR published that June. 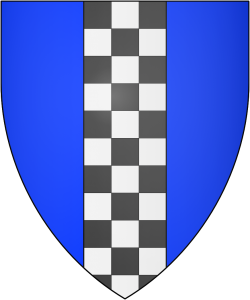 But over the course of its nearly fifty-year history, it turns out there have been nine other affiliated branches, eight of them founded in a two-year period from 1979 through 1981. END_OF_DOCUMENT_TOKEN_TO_BE_REPLACED