I stumbled upon this armorial design while doing some research into obscure field divisions and decided to add it to my collection of badges. 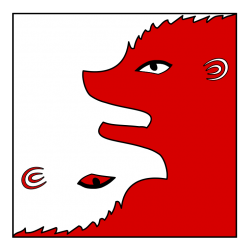 Per bend sinister argent and gules, issuant from the line of division a bear’s head and a bear’s head inverted contourny counterchanged.

The illustration is adapted from a woodcut by Hans Burgkmair the Elder of his arms, 1516. Burgkmair was a painter and engraver who became a master woodcut printmaker. 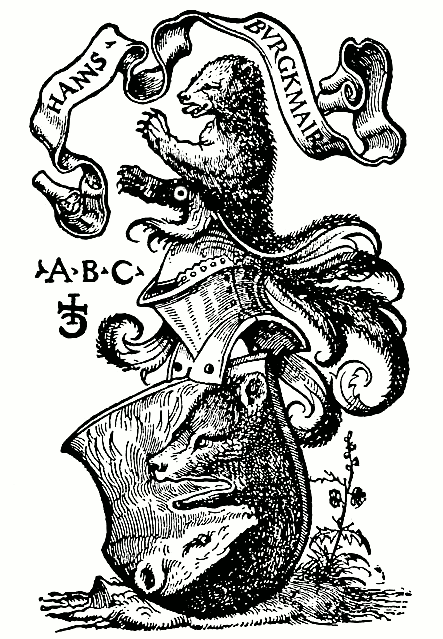 His arms feature two bears, interlocked at the jaws, Or and sable. In German armorials this type of design is blazoned “Bärenschnitt” which we might translate as “bear-cut.”

The rendition used in the submission is taken from an emblazon by Madboy74 posted to Wikimedia Commons and released into the public domain.

This badge was registered on the January 2019 Letter of Acceptances and Returns with this commentary:

As noted in registering the device for Sigrothr Melrakki in March 2018:

A rare but notable practice in German heraldry was to have charges issuant symmetrically from either side of a line of division, forming the appearance of a complex line of division. When formed of animal’s heads, the jaws of each head would frequently interlock in the center of the line of division. The practice appears to always have the same type of charge repeated on each side of the division, rather than different charges on each side. For SCA purposes, each submission following this pattern should be treated as two separate charges, each issuant from the line of division, with the type of field division (per bend, per fess, per pale, etc.) dictating the angle of the charges issuant therefrom.

This is one of the rare cases in SCA heraldry where we will allow animate charges inverted.