Today, I received an inquiry by email that sent me down an interesting research rabbit hole, and (with the permission of my correspondent) I thought I would share that question and my answer here:

The arms of my Achym family of Pelynt in Cornwall, England, are recorded several slightly different ways:

The arms as tricked on an ancient monument in the Pelynt church (ca. 1560) displays nine cinquefoils and the maunch that is shown in Maunch (2) of your online book. Both the maunch and the cinquefoils are displayed in gules.

I have searched to no avail to learn what “maltayle” means. Perhaps it is the rendering of the maunch shown as maunch (2).

Any advice or wisdom will be appreciated.

Hello, and thank you for your interesting question!

Spelling in the medieval and renaissance periods is notoriously uneven, which can make it hard to search for terms like this — the same term shows up as maltayle, maltaile, and maltale — but I think I managed to figure this one out:

“Maltayle” means “poorly tailored,” as in a piece of clothing which might be decorative but would not fit well.

Charles Elvin’s book Dictionary of Heraldry (1889) defines “a maunch maltale” as “a maunch, as borne by Hastings… called by Legh, a Maunch Maltale, i.e., ill-shaped, or cut.” [archive.org]

The “Legh” he mentions here is a book by Gerard Legh (sometimes spelled Leigh), The Accedence of Armorie (1562), who uses the term “manche maltale” to describe a very stylized maunch, which no longer resembles a detachable sleeve, but has mutated into an abstract symbol. [archive.org] 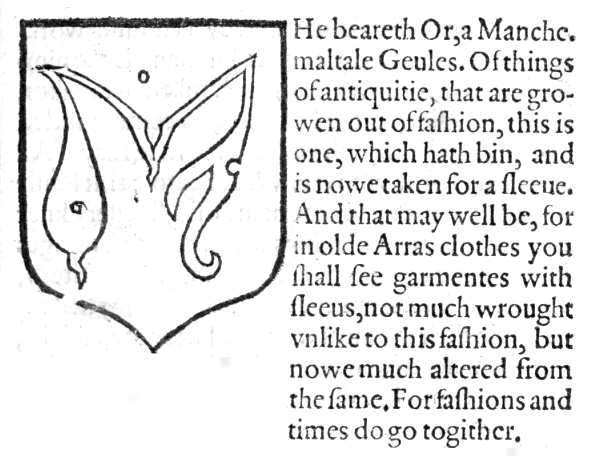 Elvin’s book includes pictures of a “realistic” maunch and some abstract or “maltale” maunches (#31-35). [archive.org]

My interpretation of all of this is that your family’s arms have long contained a maunch, which at various times and places has been drawn differently, according to the style of the artist, and that when people many years later put together armorials listing old bearings, some of them described the maunch as “maltale / maltayle” to indicate that the version they were looking at was a heavily-stylized abstract depiction rather than a realistic image of a sleeve, while others did not.

I hope this answers your question!

3 thoughts on “The Mystery of the Maunch Maltale”